In my last blog post, I wrote about the current conflict between the traditional CAD planning process (2D and 3D graphics) and the BIM-based planning process (intelligent 3D models). If a project is going to be based on BIM technology, the next step would be to clarify the shift of effort. According to an article that was published in December 2014 by the Detail, BIM technology is especially important to clients and contractors who see it as the next generation technology (Schoof, Jacob. “BIM in der Architektur: Verweigern oder Durchstarten?”). However, it is still unclear which opportunities and risks have to be taken into account by architects who are using this new planning method.

Regarding the BIM implementation, a major issue and a question which is constantly being discussed is the substantial value addition and its consideration in terms of remuneration. In this context, a study has been carried out and published by the Karlsruhe Institute of Technology within the field of Building Lifecycle Management. The aim of this study was to analyse the potentials and obstructions in the implementation of an integrated BIM methodology in the construction industry of Germany. As a result, the survey has shown that there is a strong link between an efficient structured management and the utilisation of BIM technology. Furthermore, the study concludes that the utilisation of BIM technology can basically lead to a significant addition of substantial value, but the current challenge is the development of appropriate remuneration concepts for model-based planning services being based on BIM technology.

Generally planning services are defined as architectural and engineering services as stated by the German HOAI (Official order of fees for services by architects and engineers). Compared to the traditional planning process, the BIM implementation can lead to a shift of effort within the defined service phases of the HOAI, as shown in the graphic above. Therefore, using the current version of the HOAI seems to be complicated since these shifts of efforts cannot be displayed in compliance with the standard cost structure of the HOAI. In order to match these services by architects and engineers and thus the planning effort as a whole it needs more flexibility regarding the traditional compensation and remuneration model.

Percentages of Fees according to HOAI

As part of the amendment of the HOAI 2013, the BIM method was introduced by name as “3D or 4D Building Information Modelling” and defined an additional service during the preliminary design phase. A development which I like to call a step forward but still it does not meet the overall requirements. The same result has been identified in a publication by Dr. Schiller & Partner which is called “HOAI 2013 bringt neue Aufgaben für alle Planer” (HOAI 2013 leads to new tasks for all architects and engineers). The publications points out that it is not clear why the BIM method as a term appears only as part of the preliminary design phase. Usually the BIM technology reveals its benefits throughout the entire planning process and therefore cannot simply be added in combination with the conventional services. Therefore, the BIM method should be understood as an integral part of the entire planning process rather than a simple task that could be added as an additional service.

Distribution of Fees in a Project

In 2011, a research report called “BIM | HOAI” has been published by the Federal Institute for Research on Building, Urban Affairs and Spatial Development (BBSR) at the Federal Office for Building and Regional Planning (BBR). This report already outlined that the traditional compensation and remuneration model of the HOAI cannot be applied on a BIM based project as it does not reflect the individual contributions of each project member. Particular new and additional planning and coordinating services, such as BIM management, will more likely lead to a significantly different distribution. Therefore, it should be noted that an adequate compensation between the project members has to be negotiated individually, unless it is a BIM-based project. Only then, it is possible to ensure a “just and reasonable” compensation which reflects the improvement of efficiency by using the BIM technology.

We have the choice, being overrun by BIM or seeing it as an opportunity. (Jakob Przybylo, Obermeyer Planern + Beraten, 2014)

In order to be able to work collaboratively with BIM technology, it needs all disciplines to define recognized BIM standards, regulations and norms as part of a contract. In this context, also the study by the Karlsruhe Institute of Technology outlines the same conclusion as it underlines the lack of reliable contract templates for BIM applications and planning processes. Without these an adequate, substantive and formal quality of a BIM model cannot usually be guaranteed. The basics for a BIM project or an efficient data model are usually developed during the phase one: establishing the bases. The form will grow, change and expand as the project progresses and changes to standards and best practices may be proposed for consideration. At this time, there are still no specifications and quality criteria which were published by public authorities being used for BIM projects.

In conclusion, it should be noted that the current concept of compensation and remuneration in compliance with the HOAI cannot be considered to be suitable for a BIM-based project. Especially since the European Parliament recommended their member states to consider the use of BIM technology to modernize and improve the public procurement processes on the 15th of January 2014, another amendment of the HOAI is necessary. In this context, the RIBA: Plan of Work 2013 could be used as an example as the UK already mandates the use of BIM technology for all central government projects. 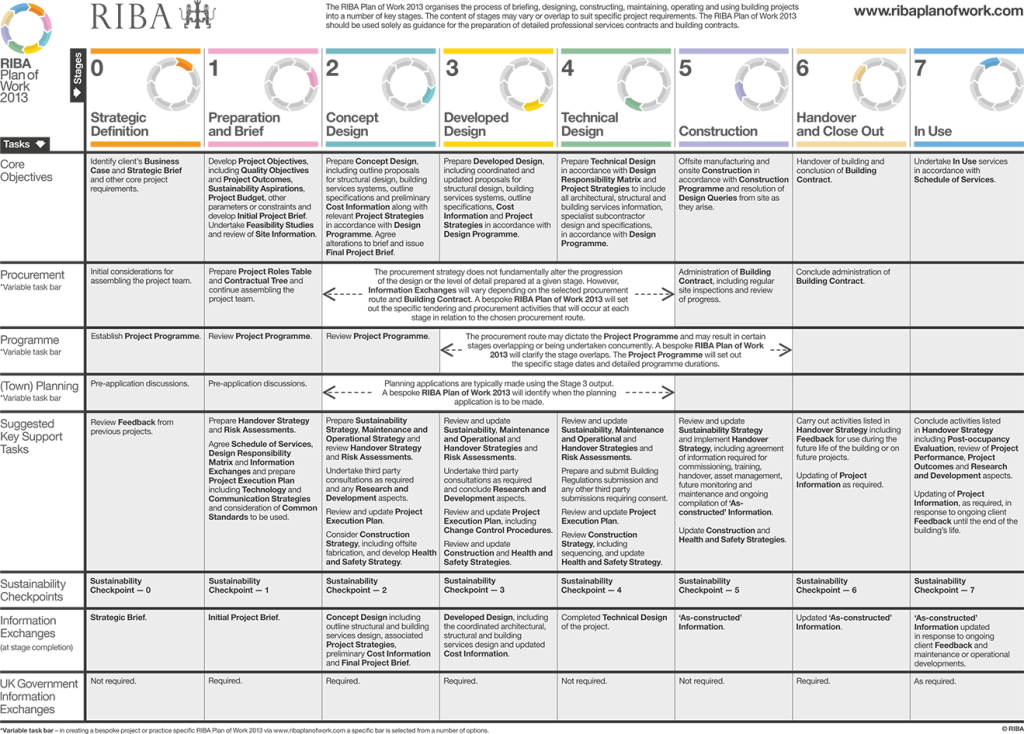