Models of buildings have been used for centuries to be able to explain what is to be built. Today the computer technology offers the possibility to create and develop models in a digital environment. In context to other industries such as the automobile industry, the digital revolution in the architectural, engineering and construction industry (AEC-Industry) has just started. Many architects and engineers are already using new additional software applications which allow them to distribute 2D drawings while creating a virtual 3D model for the design development. However, the data exchange formats which are used between all project members are still mainly influenced by 2D standards. Only a few architects and engineers are already working primarily with 3D software to create their own models and sharing these with other project members to exchange relevant information. This raises the question of why the data exchange and therefore, the related transfer of information in general has still not changed in the AEC-industry?

Back in 2007, I read an article on Building Information Modeling which reflected on the implications and also dealt with this issue. Published in April 2007 in the Architectural Record with the title „Transformative Tools Start to Take Hold“ by Joann Gonchar (Volume 195, Issue 4, Page 155-162), the author already argued that BIM technology is more than a new way of drafting, it is really a paradigm shift for design and construction. In her article, she points out an issue which, even today, is still a challenge for architects and engineers in many countries: the lack of standards for Building Information Modeling and, for the organisation and format of the data contained within those models. In this context she refers to Russel Wooten who puts this prevailing challenge in a nutshell:

We still depend on standards that are a legacy of drafting in 2D. (Russel Wooten, Kirksay Associate, 2007)

The adoption and use of shared standards is an integral part of the BIM technology. In this context, I have already outlined in my blog post called “BIM vs. HOAI”, that the HOAI cannot be considered to be suitable for a BIM-based project. But what could companies do to be able to implement BIM-based projects successfully in Germany, not being handicapped by the current situation? One possibility is to develop and establish standards on their own, being able to implement these on a BIM-based project. Therefore it is recommended to review and to integrate international standards that already have been are recognized and established in practice.

There are already some countries such as the UK and the USA that have taken over the leadership in the implementation of BIM technology. First we take a look across the Atlantic and looking at the standards that have been developed for BIM-based projects over there. Organisations such as the National Institute of Building Sciences (NIBS) are pushing hard on this issue and in 2007 they have published the first version of the National Standard for Building Information Modelling (NBIMS), also known as the US National BIM standard. In 2012 they have released a second version of the US National BIM Standard (V2.0). A particular focus of the NIBS effort is the accessibility of information during the design and construction phase and especially during the building’s facility management phase. That allows a large number of project members to access the data, being able to create additional value for a variety of stakeholders. 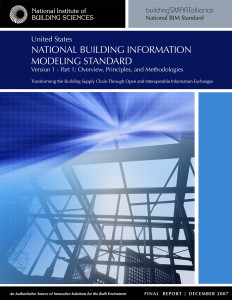 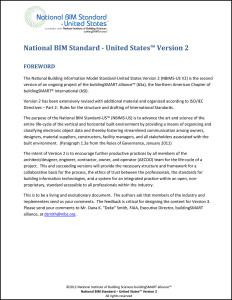 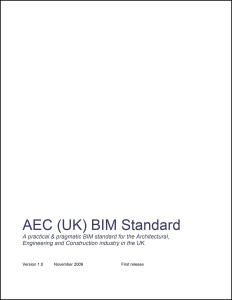 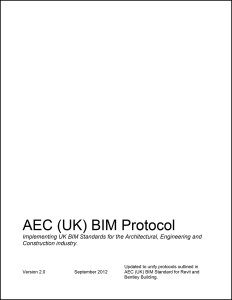 In this context, I would like to take a closer look at a section within the AEC (UK) BIM Protocols which defines the model development methodology in relation to the graded component creation, known as the “level of detail”. Basically, a model always consists of several so-called model elements or model element groups, which represent a physical item (e. g. wall), non-physical item (e. g. room) or non-physical invisible item (e. g. loading). Therefore, an element corresponds to a single building or drawing component, also being able to be integrated within a system (e. g. curtain system). According to this section within the AEC (UK) BIM Protocol, the level of detail is divided into three stages, in order to define the specific requirements for the content of individual model elements and the validity of their use during the planning, design and construction phase of the building:

G0 – Schematic: A symbolic place-holder representing an object which may not be to scale or have any dimensional values. This is particularly relevant to electrical symbols which may never exist as a 3D object.

G1 – Concept: A simple place-holder with absolute minimum level of detail to be identifiable, e.g. as any type of chair. A superficial dimensional representation, created from consistent material: either “Concept–White” or “Concept–Glazing”.

G2 – Defined: Contains relevant metadata and technical information, and is sufficiently modelled to identify type and component materials. Typically contains level of 2D detail suitable for the “preferred” scale and sufficient for most projects.

G3 – Rendered: It is Identical to the Grade 2 version if scheduled or interrogated by annotation. It differs only in 3D representation. Used only when 3D view at a sufficient scale deems the detail necessary due to the object’s proximity to the camera. Components may appear more than once in the library with different grades and the naming must reflect this. 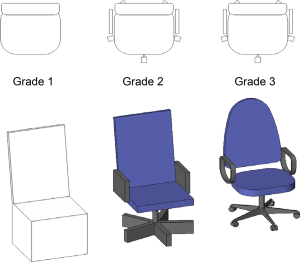 A similar system is being used in the USA, which defines the model development methodology in relation to the graded component development, known as the “level of development”. Instead of three levels, the quality of model elements is divided into the LOD 100 to 500:

LOD 100: The model element may be graphically represented in the model with a symbol or other generic representation, but does not satisfy the requirements for LOD 200. Information related to the model element (i.e. cost per square meter, tonnage of HVAC, etc.) can be derived from other model elements.

LOD 200: The model element is graphically represented within the model as a generic system, object, or assembly with approximate quantities, size, shape, location, and orientation. Non-graphic information may also be attached to the model element.

LOD 300: The model element is graphically represented within the model as a specific system, object or assembly in terms of quantity, size, shape, location, and orientation. Non-graphic information may also be attached to the model element.

LOD 350: The model element is graphically represented within the model as a specific system, object, or assembly in terms of quantity, size, shape, orientation, and interfaces with other building systems. Nongraphic information may also be attached to the model element.

LOD 400: The model element is graphically represented within the model as a specific system, object or assembly in terms of quantity, size, shape, location, and orientation with detailing, fabrication, assembly, and installation information. Non-graphic information may also be attached to the model element.

LOD 500: The Model Element is a field verified representation in terms of quantity, size, shape, location, and orientation. Non-graphic information may also be attached to the Model Elements. 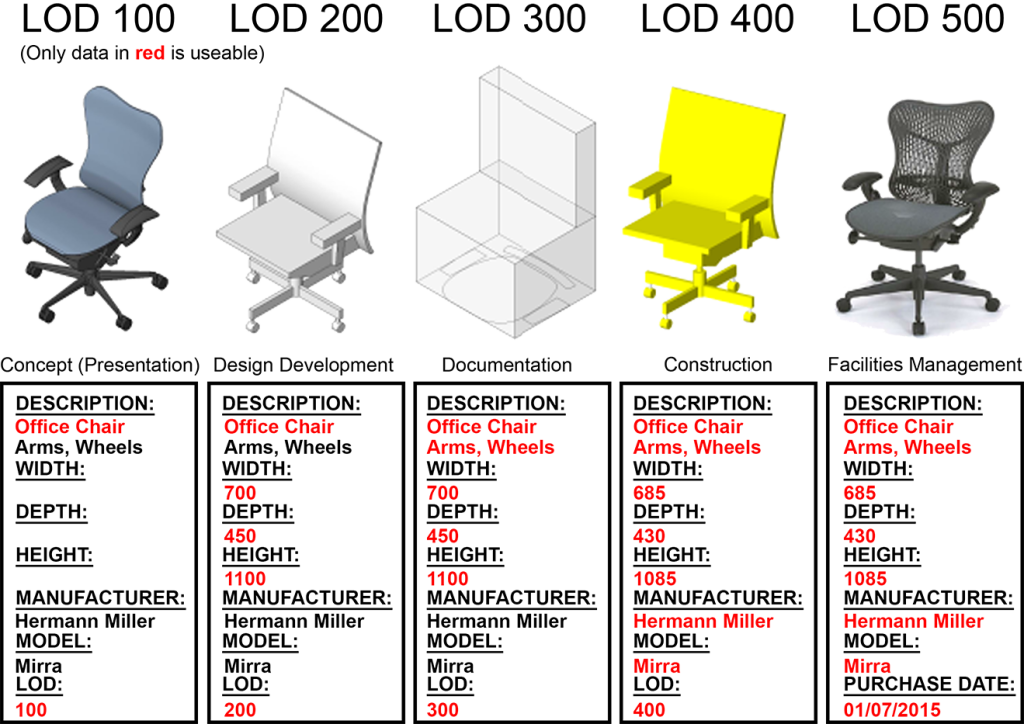 Whether or not the model development methodology in based on the level of detail or level of development or a mixture of both of these, each level follows the previous one, containing all the graphical and non-graphical data of the previous level. In this context, the model element authors have to complete the level gradually in relation to the different project phases as provided in the contract. 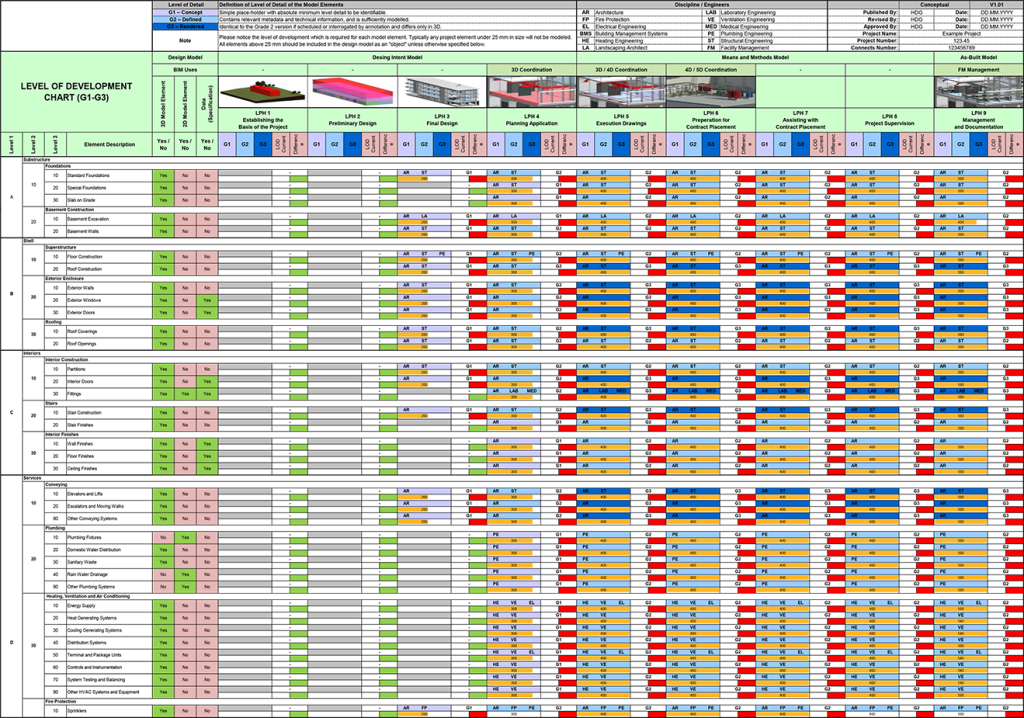 If these BIM standards are used to develop and define an own project-specific BIM standard, graphical and non-graphical information can be developed and classified cooperatively. The final step would be to clarify which information has to be shared and able to be extracted from the model at which point of the project. In order to address this issue, the “UK BIM Element and Attribute Demand Matrix” has been developed in the UK. Based on the so-called “COBie Format” (Construction Operation Building information exchange), this matrix can be used to define additional standards for the information that has to be implemented into the model. In conclusion, this matrix predefines within an excel file which information has to be implemented in context to the project phase and determines the project member who is responsible to implement, extract and export this information. 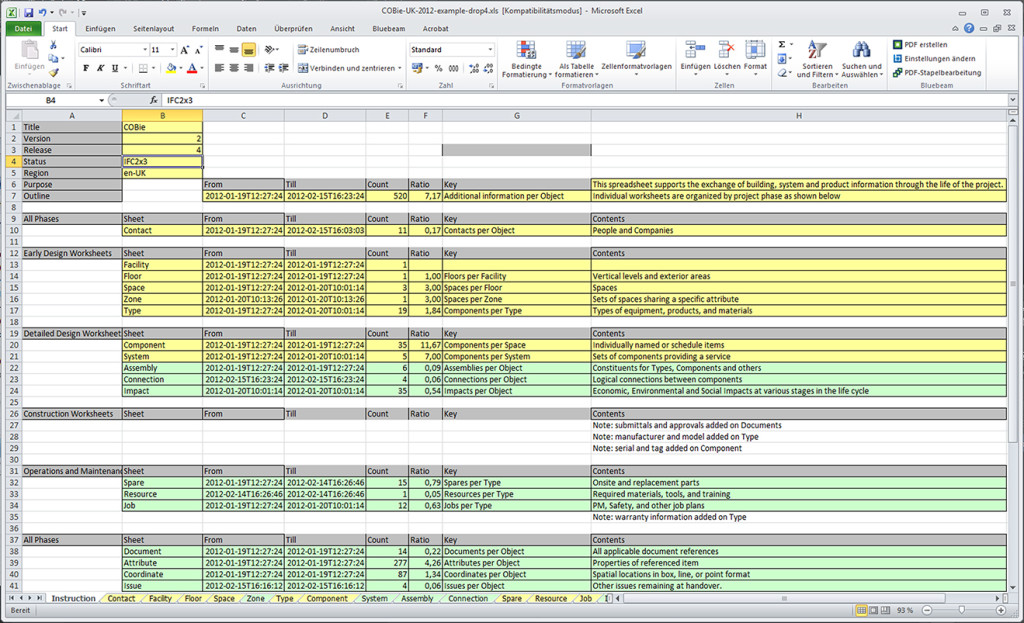 In general, the COBie format is much less widely used than the IFC format (Industry Foundation Classes). A survey that was asking for the formats that have been used on BIM-based projects has been carried out by the National Building Standard (NBS) and published in the National BIM Report 2015 in April 2015. The outcome of the survey indicates that fewer than 20% are currently using COBie format on their project.

Do you use COBie on your projects?

Do you use IFC on your projects?

At this stage, it is difficult to evaluate if both, the IFC and the COBie format will be established within the AEC-industry, but a higher adoption rate is diffidently needed. Currently some users do not like to use the COBie format as the whole Excel sheet concept contradicts the fundamental principle of a common data environment.

Also the publication of a German BIM standard cannot be expected within the next few months. But the final report of the commission for large-scale projects (German: Reformkommission Bau von Großprojekten) which has been published by the Federal Ministry of Transport and Digital Infrastructure on the 29th of June 2015 can be seen as a positive development. In this report the commission concludes that digital methods and BIM technology in particular should be implemented at a much higher rate in order to be able to guarantee a consistent design development and construction, using additional tools such has clash detection and simulation software. In order to support the adoption of BIM technology, the commission recommends to establish suitable regulations and to support the implementation on large-scale projects. In conclusion, the report also indicates that digital requirements, standards and concepts for the design and construction phase are needed.