It’s tempting to think of Building Information Modeling (BIM) technology as a simple software application. In fact, this widely used term describes highly technologically advanced, collaborative and information centric processes by which digital models are generated to collate, manage and communicate information through the entire lifecycle of a building or project. Like Germany, many firms in Australia are already incorporating BIM technology into their daily workflows. This is driving cultural change within the construction industries of both countries; which in turn is impacting on project management, collaboration and the way in which projects are fun. These changes can already be observed, but with differences in each nation in terms of implementation and acceptance.

In both Germany and Australia, the Architecture, Engineering and Construction (AEC) industry is rapidly embracing BIM. In both countries, it is expected to be standard usage within the next few years, particularly in the public sector. As part of the amendment of the German HOAI 2013, the BIM method was introduced by name as „3D or 4D Building Information Modelling“ and defined as an additional service during the preliminary design phase. This is a step in the right direction but still it does not meet the overall requirements.

A year later, in early 2014, the Federal Institute for Research on Building, Urban Affairs and Spatial Development (BBSR) at the Federal Office for Building and Regional Planning (BBR) published the first “BIM-Guide for Germany”. This (BIM) guide is essentially a manual, incorporating recommendations and examples informed by user experience, to be used as a template for the development of a so-called “BIM Abwicklungsplan” (BIM Execution Plan). However, it is not a legal document that mandates how BIM technology should to be implemented in Germany.

In Australia, the BIM implementation is currently being driven by industry organisations such as NATSPEC (National Specification System of Australia) and BuildingSMART Australasia as well as the private sector. The first “National Guidelines and Case Studies for Digital Modelling” in Australia were published in 2009. This document – like the BIM-Guide for Germany – provided an overview of BIM; detailing the ways it might impact current workflows and how it could be used to develop a fully collaborative, model-based facility.

Two years later, the “NATSPEC National BIM Guide” was published, offering a suite of BIM documents that could be used as a reference for implementing the approach on a project. 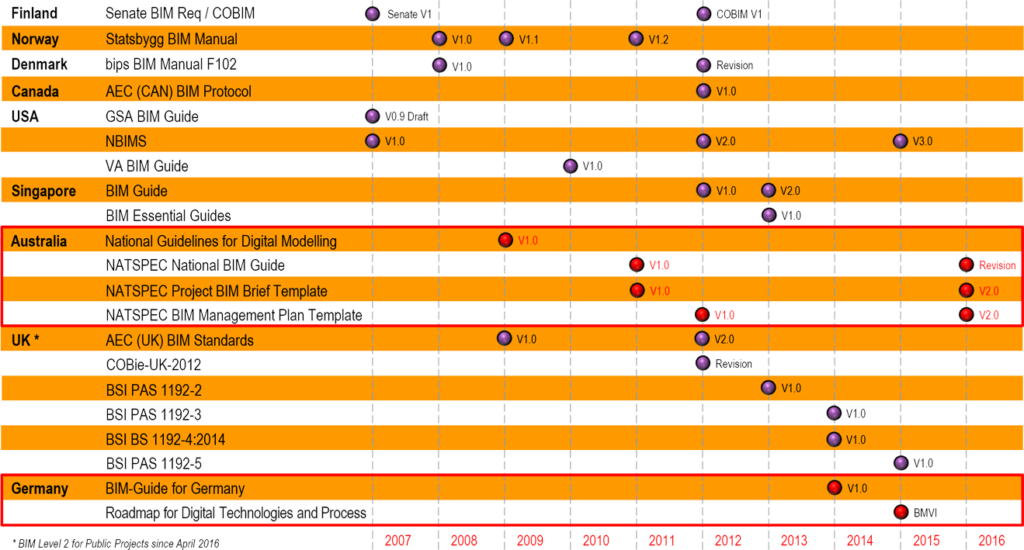 Following this development, BuildingSMART Australasia prepared and published the “National BIM initiative Report” in June 2012. This report recommended that the Australian Government set a date of 1st July 2016 from which procurement for all its buildings would require “Open BIM”, providing for a fully collaborative mechanism with open standards for information exchange.

Despite this recommendation and its rapid uptake within the AEC industry, there is still no government mandate for BIM in either country, and no statutory frameworks or case law to establish consensus or uniformity. However, the Australian government is now strongly encouraging the construction industry to implement BIM technology, having recognised that it is already changing the way buildings are designed, built and managed. In March 2016, the Federal Government’s Infrastructure, Transport and Cities Parliamentary Committee recommended that all government funded projects over $50 million in value use BIM technology.

So how does this affect our practice? Grimshaw was founded by Sir Nicholas Grimshaw in 1980 and today, it operates worldwide with offices in New York, London, Melbourne, Sydney and Doha employing over 400 staff. Grimshaw’s Sydney studio was established in November 2010 by Andrew Cortese and has since grown to a team of more than 80 professional staff.

The $145 million Materials Science and Engineering Building (MSEB) at the University of New South Wales was one of the first BIM projects undertaken by the Sydney studio. The concept and execution of the 23,000m² facility was awarded to Grimshaw Architects in 2011, through a competitive design process. Grimshaw was appointed as the head design consultant, with HDR Architecture consulting on laboratory design, TTW and Steensen Varming as the principal sub-consultant and Brookfield Multiplex as the contractor. 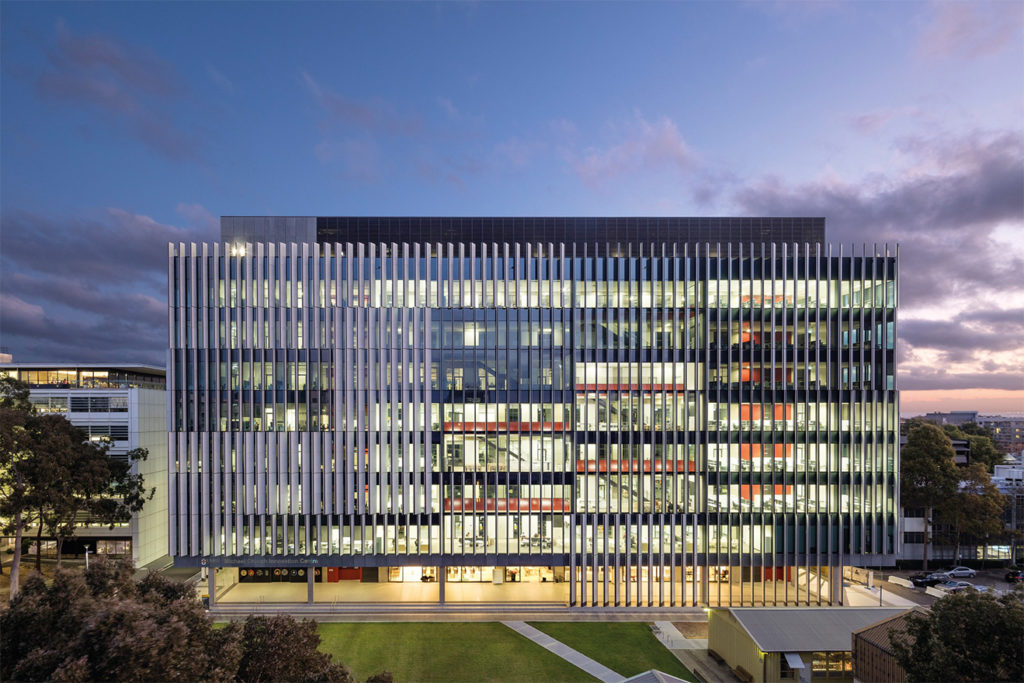 The strategies for migrating the building information models used for design and documentation of the MSEB were based on BIM Level 2 (Submission LOD 300). In general, BIM Level 2 is distinguished by collaborative working. Each discipline creates its own sub-model which, in combination with the other models, represents the entire project. How the information is exchanged between different parties, is the crucial aspect of this level of collaboration.

Looking at the MSEB, Revit has been used as the primary BIM authoring CAD software. Models that have been created with Rhino / Grasshopper have been linked into the Revit models, using the so-called “Chameleon” plug-in for both Grasshopper and Revit. This allowed the project team to share design information through a common file format (RVT), which enabled each discipline to be able to combine that data with their own; generating a “Federated BIM Model”, and later to carry out interrogative checks on it. 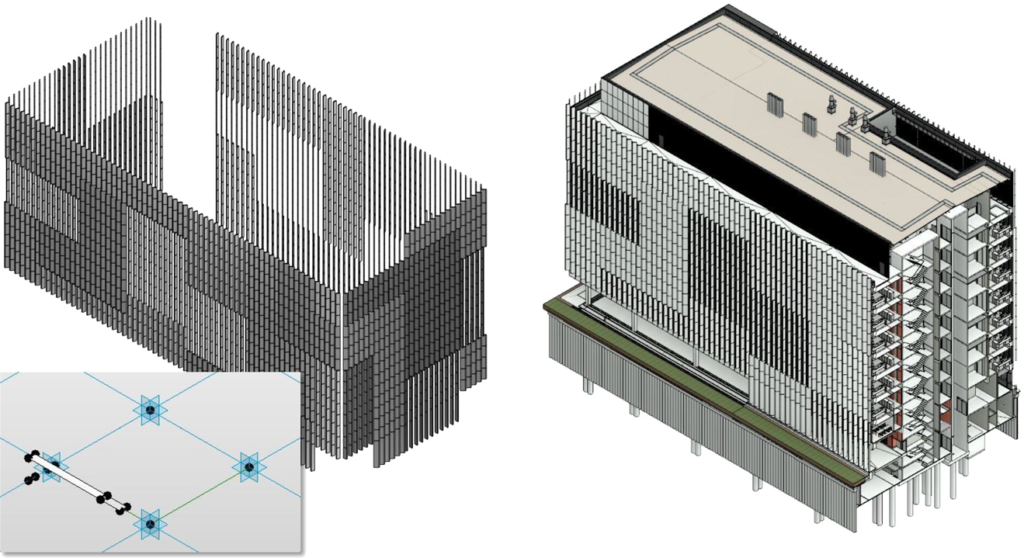 The BIM management for this project was based on the aforementioned NATSPEC standards. The NATSPEC National BIM Guide: Clause 3.1 requires that at the initiation of a Level 2 BIM project a “BIM Management Plan” (BMP) be developed. This document outlines relevant BIM workflows and guidelines at every stage of the design process; from the initial pursuit to the final delivery of the project and responds directly to the “Project BIM Brief”. In general, these two documents are comparable with the German “BIM Lastenheft” (BIM Protocol) and “BIM Abwicklungsplan” (BIM Execution Plan).

In addition, a technical part is attached to the BMP, called the “Technical Appendix”. It usually contains detailed information, schedules and technical requirements for BIM Managers and Model Managers. The “Level of Development (LOD) Specification”, also attached to the BMP, is usually developed later, or after completion of the design phase. It is a reference that enables practitioners in the AEC Industry to specify and articulate with a high degree of clarity the content and reliability of Models at various stages in the design and construction process. 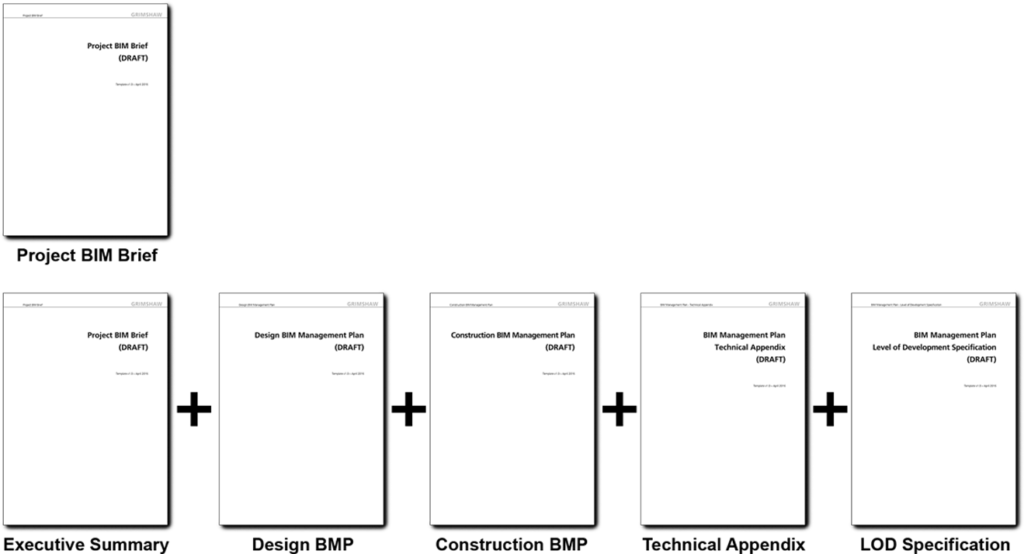 But until now, state and federal governments have yet to publish or mandate quality criteria – this is true also for Germany. The federal government is however heading in the right direction, with the publication in March 2016 of a report recommending the establishment of a “Smart Infrastructure Task Force” modelled on the “UK BIM Task Group”.